I played in the Northern Alberta Open this weekend.

Round 2
One of the advantages of taking a half point bye in round 1 should be that a player like me in the middle won't have to play an IM or beginner in the first round and in round 2 should be paired with lowest rated winner or highest rated loser from round 1 - either way it should be someone close to my rating.  But in this tournament FM Vladimir Pechenin (2439) also took a bye in round 1, so I was paired with him in round 2.  He played the French Defense and I played a very good game.  I had the better position until move 27 when I missed a tactic.  Even after that Vlad didn't play completely accurately and showed me after the game where I had a winning move on move 30 (see position below and find White's winning move!).  I missed it and played an inferior move that left me behind.  After that Vlad converted his advantage and I resigned after the 40th move.  We were the last game to finish and were both down to under 2 min on the clock.  0.5/2 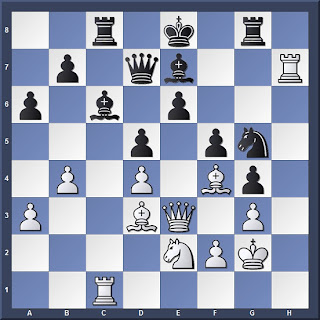 
Round 3
Paired against Carlita Romero, an unrated player from 10 hrs north of Edmonton. I played the French Defense !? and was able to get a big advantage in the opening and won quite easily in about an hour.  After the game I started calling hotels looking for a room but was having little success.  It seems there was a concert, a hockey game and a wine festival in Edmonton this holiday weekend.  I considered driving home and returning in the morning but eventually found a hotel in Nisku (a half hour away).  1.5/3

Round 4
My stay in the trucker hotel was interesting, with the the wafting scent of mary-jane through the ventilation, the ringing of the VLT's and blackjack tables and the "peelerz" all under the same roof.  I got to the chess club 15 min before the start of the round and was sitting at the board at 10 AM and made my first move 1. e4.  Then I waited for an hour for my opponent (an unrated player) who never showed up.  It was bad enough to be paired twice in a row against an unrated player but then for the player to not show up made it worse.  I was hoping to have at least 3 good games against FIDE rated players this tournament, but now that is impossible.  2.5/4

Round 5
In my final round I was hoping to be paired against another one of the players sitting at 2.5, which would probably be a 2100 player, but since there were 7 players with 2.5 and I was the lowest rated,  I got paired down to play against Bill Bentley.  He played the French so that makes it a clean sweep for the opening in my games at this tournament.  I didn't play the opening very well and Bill decided to close the center with c4.  After that I was able to create something on the kingside but my pieces always seemed to be in each others way.  I turned down a draw but after all the major pieces were traded I didn't see any way to make progress so I offered a draw and he accepted.  3/5

A summary of the Tourney Can be found on the Alberta Chess Association website here. I ended up tying for the Best under 2000 prize and winning $40. 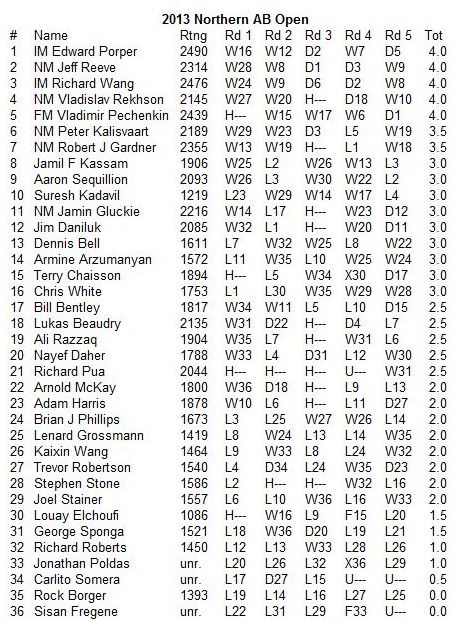 TerryC
This is my chess blog. I plan to discuss my tournament chess games as well as chess related topics of interest to Alberta and Saskatchewan. My chess rating is ~1900, which makes me an "A Class" player, but like every other chess player I think I should be one class higher. I had a 13 year period where I did not play any chess but returned to tournament play after my kids started playing schoolastic chess.